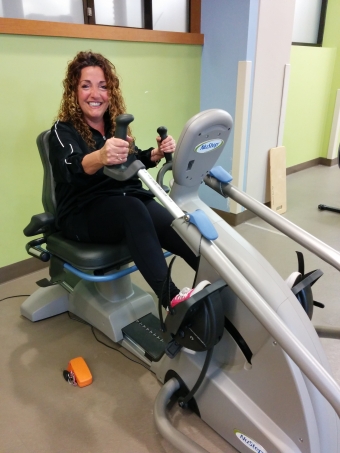 “I’m always the one falling and tripping over things,” she says laughing. “I’m very klutzy.” But this time was different. Felicia Kostecky fell on the bathroom floor at 5:00 a.m., making enough noise to wake her husband, Robert. He called out to her, asking if she was okay. When she didn’t answer, he rushed to the bathroom to see her still laying on the floor. Noticing immediately that the left side of her face had dropped, he called 911 and told them his wife was having a stroke.

A stroke occurs when a blood vessel in the brain becomes blocked or bursts, resulting in a lack of blood supply and surrounding nerve cells to be cut off from their supply of nutrients and oxygen. In Felicia’s case, the lining of the carotid artery, one of the two key arteries in the front of the neck, pulled away and ripped, resulting in a blood clot forming in her brain. Felicia had no warning signs or symptoms, which are usually high blood pressure or high cholesterol.

As a trained Emergency First Response and Handicapped Scuba Association instructor, Felicia knew the symptoms of stroke, but insisted to her husband that she was fine and that she was just tired.

When the paramedics arrived, they had to wake Felicia up since she had gone back to bed.  She was taken to Greater Niagara General where a neurologist was waiting to give her a CT scan. Once the type of stroke was diagnosed, she received a shot of t-PA (tissue plasminogen activator), that when given in time, can often break up a clot, restore blood flow and help prevent permanent damage. Not all stroke patients are eligible for the shot—it depends on the type of stroke, timing and symptoms.

One week later, she was on her way to Hotel Dieu Shaver Health and Rehabilitation for recovery. “I was so excited to come here, I couldn’t wait.”

While recovery is difficult, it is also hard on family and friends. “We, as the patient, only have one job to do—that’s to get better.” Robert had multiple roles in taking care of the house, working, and visiting Felicia whenever he could. He researched facilities in the United States, but soon realized there was no better place for Felicia to recover.

The feeling in her leg came back within days. Felicia forced herself to walk. “I refused to use a wheelchair. I was on a wheelchair boycott. I got up anyway and walked, whether they said I could or not.” Even when she was told she had to bring her wheelchair to therapy, she would push it instead of wheeling herself.

Working with occupational and physical therapists, her left side strengthened and her speech started to return. “The therapists were great and really encouraging. They would say ‘good job’, even when it wasn’t a good job,” Felicia says with a smile. “This facility is amazing. There’s no place better for anyone suffering from a life altering event.”

Her determination and enthusiasm was contagious. “I didn’t have time to be depressed. There were moments where it was hard, but I was obsessed with getting myself back.” She liked to challenge the other patients, sharing stories and having their own little ‘cheering squad’ to celebrate even the smallest of victories. She would stay long after her therapy time was done, practicing and repeating the steps. “Everything is here for you to get better, and I used it to the extreme. Even if you did something 10,000 times with no result, go for 10,001. We’re here, so take advantage of it to get as well and as strong as you can.”

It was with the repeated steps that movement started to return to her arm and wrist. “That’s when things really started to come together.” The smallest movement helped motivate her to increase her goals.

Just three months after her stroke, Felicia is back at home, fully recovered. Her new goal is to increase her endurance. She hopes to return to work with the Handicapped Scuba Association, teaching scuba and water sports, where she says, she now has a better understanding of the struggles her students go through.