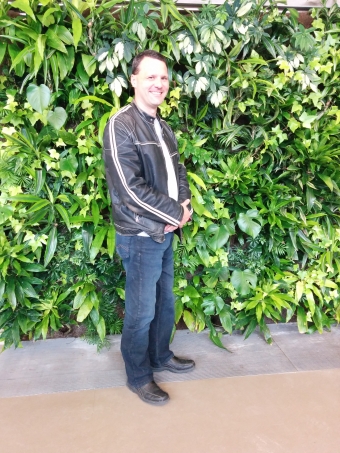 You may have seen his story - an Ontario Provincial Police (OPP) escort motorcycle squad was driving on Highway 400 in Barrie, comprising of about fifteen motorcycles. The roar of the engines scared some nearby geese from the ditch and one went flying into Officer Pete Tucker’s face - knocking him unconscious immediately.

Pete was teaching a motorcycle escort course to officers for the upcoming Pan-Am games. He had joined the Golden Helmets OPP Motorcycle Precision Team in 2005, saying "it’s all I’ve ever wanted to do." Riding with his team and escorting VIPs like the Queen, United States President Barack Obama and the band U2 are some of his best policing memories.

Once the goose knocked Pete unconscious, Pete’s motorcycle hit the guardrail, severed his left leg and sent him flying 29 metres into the air. Pete landed so far from his bike, rescuers could not find him at first. The dirt and debris had even wiped off his nametag.

Although a catastrophic accident, a few lucky breaks would come together to help save Pete’s life. Tourniquets, a compressing device, were becoming new pieces for police officers to carry in their vehicles – and by chance, a fellow officer and friend had one on him that day. The accident had happened minutes from the Barrie Hospital where a trauma surgeon from Sunnybrook Hospital happened to be visiting a friend. ORNGE helicopter had a patient transfer cancellation, and was at the hospital pad, ready to take Pete to Sunnybrook. All of the elements were in place for the rescue and medical teams to act quickly and save Pete’s life.

Friends in the OPP contacted Pete’s wife and high school sweetheart, Michelle, and made the drive with her from St. Catharines to Toronto. She was escorted by the Toronto Winged Wheels, another motorcycle policing team. All anyone could tell her was, "He’s alive right now."

She had no idea what to expect. When she finally was able to see her husband, he had a severed left leg, dislocated right knee and face damage that would later have to be repaired with plastic surgery. The accident had also caused pneumonia and kidney failure – a result of the trauma of the accident. Goose feathers were found in his lungs which left him on a ventilator.

Throughout his recovery, Pete had the support of his OPP friends and family, and his four children (two daughters and two sons, ages 10 to 17). Michelle stayed by his side, visiting every day and leaving only at night. Michelle had asked for one of the goose feathers found in Pete’s lungs, and now wears it in a locket around her neck as a reminder of the strength of their love.

"The OPP has been fantastic, and have been there for me, my wife and kids," Pete says. "What I’ve learned going through this is who your friends really are. So many people have done things for us and helped us."

Pete spent one month at Sunnybrook in critical care. He was then sent to the St. Catharines hospital where he spent another month recovering.He was transferred to Hotel Dieu Shaver Health and Rehabilitation Centre in August 2014 where his recovery back to normalcy began. He credits the entire team at Hotel Dieu Shaver.

"Trying to do this on your own would be like giving a kid a driver’s license without driving lessons. I learned to walk while I was here because I had the tools and the encouragement of the staff. They physically and mentally prepared me and helped me stay positive." He is also thankful to Alan at Niagara Prosthetics and Orthotics who worked closely with him for his prosthetic leg. "He made me feel like things were going to be okay."

Because he was at Hotel Dieu Shaver longer than any other hospital, Pete says it felt like he got to know the nurses. "It felt homier." He tried to stay positive, knowing the accident and aftermath could have been much worse. "My wife reminds me of that. We didn’t lose one of our kids, we didn’t lose a family member - it’s just a leg."

He liked walking the grounds, and sitting in the Healing Garden with his wife. "This is where I learned to walk, drive and be independent. No one thought I would do any of that again." Though Pete has no memory of the three days before or the five weeks after the accident, he says "I was at my best when I was at Hotel Dieu Shaver."

Before coming to Hotel Dieu Shaver, he says he heard about it, but never really thought about what the building was or what people did there. "Healthy people don’t need to think about it, but it’s so important."

After Pete was discharged in October, his wife, friends and family flew to Mexico where Pete and Michelle renewed their wedding vows.

This police officer can’t wait to get back to work. Pete now works part-time for the Burlington Crime Unit, and in June, Pete will be one of the torch bearers for the Pan-Am games.