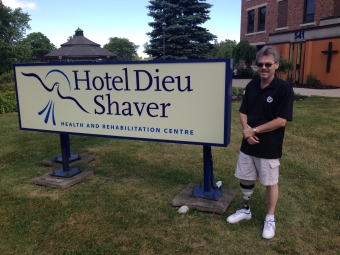 It was right before Christmas when Robert Smith from Niagara Falls discovered that he had developed an ulcer on his right foot. On December 24, the 51-year-old resident of Niagara Falls was at the Wound Clinic in St. Catharines getting treatment at one of the two oxygen chambers in the region.

Robert was sent for tests with a vascular surgeon who found that his blood was not flowing properly to his right leg. Robert was given vascular surgery. After surgery the foot still didn't heal properly and became black underneath. He was given three options: surgery to amputate half his foot, his whole foot or the leg under the knee. Knowing that foot issues could return, Robert decided the best option would be to amputate his leg right below the knee. The nurse told him taking the leg would be three months of recovery. He had already lost 27 pounds off his small frame before his surgery was booked at Greater Niagara General Hospital (GNGH) on March 25th.

Robert spent one week at GNGH healing from the surgery, and was transferred to Hotel Dieu Shaver Health and Rehabilitation Centre on March 31 to begin his rehabilitation. Robert was familiar with Hotel Dieu Shaver—his wife had been a patient after a knee replacement years before.

He was asked what his expectations were for his recovery. “They knew what to do, and they gave me everything they could to push me,” he says. “I couldn’t ask for a better place. I knew what to expect and what needed to happen.”

“The nurses were great, and therapy started right away. The whole group of therapists are just great people.”

Eventually, he was fitted with a prosthetic leg through Niagara Prosthetics and Orthotics. “Those guys were fabulous to work with. It’s great that they’re on site and work as a team with the hospital to help with your recovery.”

Being in a hospital for months left Robert, who has worked since he was 15 years old and was a goaltender for years on a hockey team, feeling a little restless. He focused all his energy on getting better. “If you’re not willing to work, you’re not going to go anywhere. It has to be in your brain that you’re going to walk again. You have to push yourself.”

First day of physiotherapy, he started talking to another patient amputee who was offering guidance. By the end of his stay, Robert became the one who was giving guidance to new patients so they would know what to expect. “This place, and my roommates, is what got me through it.”

He had an ongoing joke with his therapy team, who were always trying to find new therapies that Robert wouldn’t be able to do. “We were a team, pushing each other. They pushed themselves to find new and more challenging exercises for me to do, and I pushed myself to do them all,” he says. “If I couldn’t do it, I kept trying until I did.”

“I was sent here to get better. Everything that I saw happening here, and everything that I got to do here was fabulous, the nursing, therapy staff, the whole team were fabulous. The nurses are always there if you need anything, always very professional. Everyone was excellent.”

He calls this new life “semi-normal”. Stairs are still a challenge for him, but he’s back to work now as purchaser and receiver, off-loading trucks for Sheraton on the Falls, where he has worked for 13 years. His home had to be re-fitted for accessibility, including widening his bathroom door for his wheelchair.

He’s confident he’ll get back to where he was. He attends outpatient therapy three times a week. Robert is focusing on strengthening his whole body as well as his left ankle, which has become weak from compensating for the right leg. He says confidently, “I am going to get to running again.”

His mindset has changed. Thinking he would never have the courage to walk outside in shorts, showing the thin metal from his prosthetic leg, he walks proudly now.

He tells patients now, “If you’re here, you’re here for a reason. Don’t waste it.”