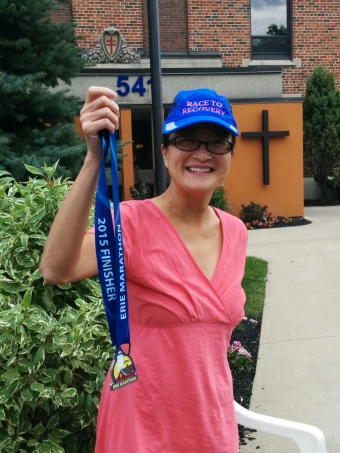 Prudence Lau is on her final race to recovery—after seven weeks of being in a hospital, she is on her way home.

In August 2015, she was training hard for the upcoming Erie Marathon 42.2k run - hoping to qualify for Boston Marathon in April 2016. She had plans to go out for sushi that evening with a friend before heading to the airport the next day for 10 days in London, England. This marathon would have been her fifth marathon in two years.

The sky was overcast but not raining. She had run just over three kilometres away from her house, and was crossing at a four-way stop in Niagara Falls. She signaled at the driver that pulled up to stop, but the brown car struck Prudence directly in her right hip. She flew into the air and landed on her right side, hitting the ground so forcefully her forehead split.

At first, Prudence thought she was ok. She tried to get herself up, but fell right back down. The driver of the car that struck her called 911, asking Prudence if she was still alive. Scared, Prudence begged the driver to stay with her. “I never had a major accident in my life. I had never broken a bone, or had an IV. I had never been hospitalized before,” says Prudence. A nurse happened to be driving by and stopped to help, trying to keep Prudence talking. Prudence was completely conscious, but her body was shaking in shock. Another driver helped to stabilize her head. When the paramedics arrived, that’s when she started to feel the pain from the accident.

Greater Niagara General Hospital gave her a tetanus shot and IV, including X-ray and MRI to assess her injuries. The pain was so bad, the board the paramedics carried her on hurt so much, that she was given morphine. A nurse began cutting off her clothes to treat her. “I was so upset. They were Lululemon!”

Her husband, notified by a neighbour what had happened, rushed to her side. He held her hand for two hours straight, not letting go. “He was freaking out,” she says, “but he didn’t show it.”

She was taken by ambulance to Hamilton. A parade of doctors and nurses surrounded her bed when she arrived. What she didn’t know was that they were checking her for paralysis. “They were tickling my feet, telling me to wiggle my toes and hands, brushing a feather on my cheek. That’s when it hit me. This is serious.”

She was told she had a hairline fracture in three places on her neck. Her vertebrae also showed fractures. Her hip bone was dislocated and fractured, her muscles in leg were torn, and her pelvis was fractured severely from the impact of the accident. “I was lying there, sweaty and bleeding and crying. I just felt like I didn’t belong there, that this wasn’t happening to me. I just wanted to go home.” Doctors hoped the neck fractures would heal on their own and chose not to operate just yet, but she had surgery to help repair her pelvis and hip injuries. She was fitted for a neck brace, which she was told to wear for eight weeks. A week later, Prudence was sent to Welland Hospital and stayed there for one week before transferring to Hotel Dieu Shaver.

Here, the former busy and fit marathon runner could finally start therapy. Being on her back for two weeks because of her injuries, when she finally stood up, it took four people to help her stand. “I thought therapy would be easy for me, but it wasn’t. Just standing felt like I had just run a marathon!”

She lost what little extra weight and muscle she had. In her first week at Hotel Dieu Shaver, nurses and therapists focused on getting Prudence to walk and do weights to get her strength back so she could be more independent. “They encourage you to get into real clothes, and for the first time, I wanted to get dressed in real clothes. I realized I wanted to live. It could be a lot worse. I’m not paralyzed. God wouldn’t give me something that I couldn’t handle, so there must be a reason. I had to accept this situation and give it to God.”

Over the next five weeks, Prudence progressed from getting in and out of bed on her own, to a wheelchair, to walking with parallel bars, to a walker. “I was willing to do anything to get me back to running. Any little step is a huge milestone. The smallest thing counts.” She is also thankful for her roommates, who all looked out for each other and boosted her spirits. “They made it feel like home for me.” Friends and family visited, and took her to the Healing Garden. The nurses nicknamed her Sunshine. “I got in trouble for doing wheelies in the hallway,” she says laughing.

She is especially thankful for the nurses. “The nurses are exceptional. All they want you to do is try to get better.” When she could finally wash her hair for the first time since getting her neck brace, “the nurse made it feel like a spa day,” she remembers. “She was doing this with so much love, like it wasn’t a chore to her. She didn’t treat me like a patient, but like a whole person. She gave me my dignity back.”

Six weeks after the accident, she was able to take off her neck brace. “It’s amazing. The doctor did a double take. The X-ray showed a clean, solid bone. My neck is healed.” Even Prudence was shocked and overwhelmed by her quick recovery, a huge leap from fearing she would be paralyzed from a broken neck. “I never believed in them before, but I believe in miracles now. This experience has led me to God.”

While she still has a lot of pain and a lot of physiotherapy to complete before she can put weight on her right leg, she is determined to run again. Her goal is to run in the Boston Marathon, eventually. “It doesn’t matter how long it takes, don’t let the dream go. I look at it like this recovery is my training for Boston.”

As she gets set to go home, she is worried about her roommates, “My poor roommates—I’m going to miss them!”

“I’m grateful to be here. It helped me with my recovery and allowed me to be more independent. I cannot say I like hospitals. But Hotel Dieu Shaver has left a positive impression, emotionally and physically, on me. I smile at the memories there.”