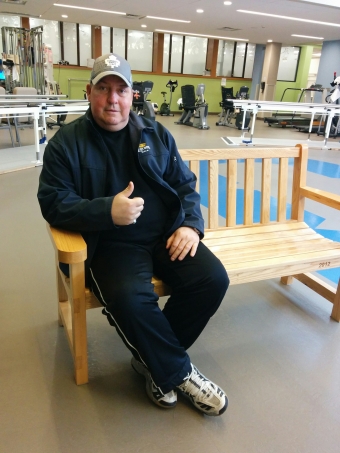 Michelle sensed that her fiancé Dean wasn’t himself when he left earlier that morning. When she couldn’t reach him by cell phone later that day, Michelle started looking for him. She found him four hours later, sleeping in his still-running truck that had now almost run out of gas.

“It’s a good thing I parked my truck, and it must have been out of habit,” Dean says. “I wasn’t aware of where I was.”

Dean woke up that day as usual – feeling fine.   At his warehouse picking up materials, he remembers he started feeling groggy and sick.

After Michelle found him, Dean was taken to the St. Catharines General - the first of three hospital trips. Finding nothing wrong, he recovered and was released. A couple of months later, the same feeling washed over him and he was taken by ambulance to the hospital, recovered and was released. By the third time, doctors realized that Dean had acute kidney failure, causing his liver to fail as it struggled to compensate for his kidneys.

Dean was put on dialysis for six months, and through it all, continued working. Dean is the owner and operator of Robson’s Tents, an event company supplying outdoor party tents and supplies. He opened his business eight years ago and had worked many events for Hotel Dieu Shaver, not realizing the programs and services available at the hospital.

Through all the hospital visits, the dialysis, the therapies, Dean struggled not only personally but professionally. “I almost lost my business”. Being the sole propietor, Michelle and Dean’s stepbrother Chris Smith stepped in to help. Michelle kept Dean on schedule as he juggled doctor’s appointments and business meetings. “So much is still a blur.”

Being in a hospital bed for many months was difficult for the very active Dean. His business is physically demanding, lifting and setting up tents and tables. He is a sports guy through and through, loves to cook, plays on a bowling league, and walks his Rottweiler Riggin whenever he can.

“It was a constant up and down, for me and my family,” he says. “Not knowing what was going on, and being in and out of the hospital worried my family especially. It’s been very difficult financially, and emotionally, and being sick creates a lot of strain on personal relationships.”

Admitted to Hotel Dieu Shaver in October, Dean no longer needs dialysis but his kidney function still needs to be monitored. “Dr. Luce (Hotel Dieu Shaver’s Chief of Staff) was my family doctor for 30 years. As soon as I saw him, he put me at ease right away.”

“I can’t say enough about the people at Hotel Dieu Shaver and how they made everyone feel at home. It’s very easy to be depressed because you feel stuck in a hospital bed. The nurses and therapists just pick you right up with their positive and personable attitude. You’re treated like a family member.”

Dean had cognitive and physical therapy. He had lost muscle tone from his hospital stay, and he’s still working on getting back his strength and endurance. Dean especially liked spending time in the Courtyard, our 5,700 square feet of therapy space, using the virtual driving machine to help him regain his license and Dynavision for vision testing and practice. “The therapists make you look forward to going to therapy.”

Two months after first arriving at Hotel Dieu Shaver as an inpatient, then as an outpatient, Dean is ready to be home for good. “It will be good to be home, and I’ll be cooking,” he says laughing.

“I am grateful for the nurses and therapists. Seeing the improvements in not only me but the other patients was amazing. I feel 1000 times better, and I owe my appreciation to everyone here, especially the nurses.”