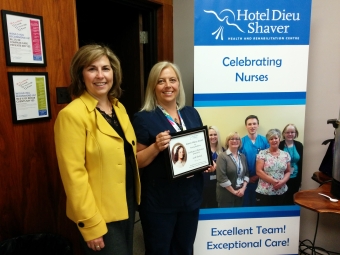 Jeanne Mance, known as the first Canadian Nurse,  immigrated from LaRochelle, France and came   to  Ville Marie (known as Montreal), Canada in 1642.

Jeanne established the first hospital in North America known as  the Hotel Dieu Hospital under the direction and collaboration of Jerome Le Royer de La Dauversiere, founder of the Religious Hospitallers of St Joseph.

This hospital was managed by Jeanne Mance until her untimely death in 1673 when  the Religious Hospitaller’s of St. Joseph who had arrived in Ville Marie  in 1659 took over the administration and management.

Jeanne Mance was known as:
A compassionate nurse
A woman of strength and common sense
Dedicated
A woman of prayer
A woman of action and courage.

In achieving her mission, Jeanne was especially gifted with devotion, faith and  know-how.
She had an iron fist in a velvet glove.

Jeanne Mance is known today as the co-foundress of Montreal and for her leadership in the development of health care in Canada.

Leah started nursing school when she was 16 years old and although originally she planned to be a teacher, fate changed that course which led her into a career as a nurse.

She graduated from Niagara College in 1995 but was unable to get a nursing job at that time. She worked as a home day care provider until 2002. She then worked for ParaMed 2002-2004 looking after patients in the community.

In 2004 she was hired at the Hotel Dieu Shaver as a part time RN on 1 east. She remained a staff nurse until May 2014 she was awarded the Full time Charge Nurse position on 1 West rehab. She continues to excel in this role and is an effective role model to all staff.  She participates in many committees and her input is valued by all nurses and physicians alike. Leah has a wonderful sense of humor that helps add to the wonderful comradery on the unit.

Leah is a proud mother to 4 children aged 9-18 years old.

National Day of Truth and Reconciliation

A day dedicated to truth and reconciliation.

Ontario Investing in Hospitals in Niagara