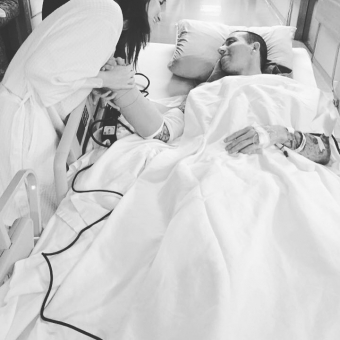 The life of a chef is not easy. Working six days a week on fourteen hour shifts left Corey, a forty year old banquet chef, without any work-life balance. Corey began to recreate the life he wanted - changing jobs, making new friends, teaching cycling to help others get in shape and spending more time with his two children.

On a beautiful spring night, Corey and his girlfriend Lianne were taking a leisurely ride on their motorcycle when a car struck them going 60 kilometres per hour. Corey had only 7.5 feet to stop after the driver turned in front of his bike. Corey swerved to avoid the car, but he and Lianne were hit directly on the right side of the bike, throwing them both on to the pavement.

Initially concerned for Lianne’s well-being, as she was thrown much further than himself, Corey realized he could not move and was "in a ridiculous amount of pain." The impact had caused his femur to puncture his inferior artery in his leg and he was bleeding.

Once Corey was stabilized at the Greater Niagara General, he was airlifted to Hamilton. It was there where he was told by the surgeon that due to the extent of his injuries, he was unable to say if they could save his leg. Not knowing what would happened and more concerned about staying alive, Corey signed amputation papers just prior to being put under anesthetic for surgery.

When Corey awoke from surgery he looked down to see that the surgeons were able to save his leg. Most bones on the right side of Corey’s body were broken and it took eight surgeries, mostly within a week of being in the hospital, to repair the damage done from the accident. After almost a month in an ICU bed, Corey remembers how "the sun shined on my face, seeing the sun, clouds, trees and outdoors – there is no better gift to be reminded of how precious life is and how grateful I was to be alive and whole."

It would take months to heal, let alone get back to life as it was before the accident. Lianne fared better, but hospitals would be home for Corey for months as he recovered. After much research, Corey said there was one place that could put him on the path to improvement - Hotel Dieu Shaver Health and Rehabilitation Centre.

"Everyone who I spoke to had really great things to say, so I said I need to be there," Corey said.

Once Corey arrived at Hotel Dieu Shaver he was well informed and given an initial assessment. "My nurse was amazing and listened - he was kind, caring and very helpful. I was getting all the answers I needed to know about what to expect during my stay."

Being in a bed for so long with minimal movement meant Corey’s body needed a lot of therapy. He was ready for therapy at 8:30 in the morning on the dot every day working on his range of motion and strength on the cable machine. After spending a few weeks focusing on rebuilding the strength on his left side, he was finally was able work on his right side. "The staff in the Courtyard therapy space have a great sense of humour. Staff know everyone who come into the Courtyard - they are funny, love joking and make it an awesome environment to heal in. Everyone has the same helping attitude and are very supportive in accommodating as many requests as possible. The staff encourage individuals to push their limits and explain things so patients understand why each exercise was important."

Corey enjoyed the meditation class on Mondays during his stay. He found the Recreation Therapy team had amazing personalities and were a large aspect his healing journey. He especially enjoyed being visited by his friend’s dogs. "The sense of joy that my roommates would get when a dog had stopped by for a visit was unbeatable. Animals have an amazing healing presence and I commend Hotel Dieu Shaver for recognizing this in a therapy setting."

After only one month at Hotel Dieu Shaver, Corey took his first steps again. Corey recounts his journey from being unable to move in a bed, to using a wheelchair and finally walking again. He reflects that "being in a wheelchair was very difficult" and it made Corey realize how inaccessible the world really is for people with accessibility concerns. Corey credits the team at Hotel Dieu Shaver for many things including setting up the services needed to return home.

Corey continues physiotherapy three times a week for two hours. During his various hospital stays, Corey designed a custom engagement ring for his girlfriend Lianne. Corey and Lianne are now engaged and are planning their future together. Corey’s overall outlook on life has changed drastically. "The people you have in your life - that’s what’s important."