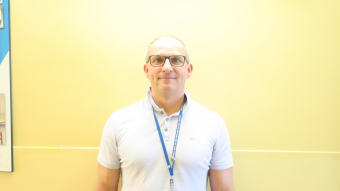 Current Position/Role:
I work as a staff Physiotherapist on 1 West. POD 1

How long have you been with HDS?:
I started as a casual therapist on the second floor in 2002. I worked then only 8 hours a week. In 2007 I took a full time position. My friend and co-worker Joy DiSimoni was a strong supporter of this decision.

What is the best part about your job:
I don’t think I will be original by saying that we all love to see our patients progressing, improving in function and eventually returning home. The fact that they recognize you on the street many years later means that we as a team of care providers made a difference in their lives.

Any advice for someone coming into your line of work?:
Well, be patient and be compassionate, one day it could be you. You can't always help, so at least be nice. “ Primum non nocere”

What are your hobbies/interests:
I don’t have real hobbies. I like being active, I like outdoors. Everybody knows that I used to spend many hours lifting weights. Now they are getting too heavy so I converted to lighter lifting, like a glass of wine.

Where is your favorite place to eat?
Home. For casual eating we often go to Beatie`s because I am cheap and I like their buns. For celebrations I like restaurants with the cloth on the table, so .. Casa Mia.

What is the best book you have ever read?
Since university all of my readings have evolved around my profession. But in high school l was impressed by two authors: Hemingway and Sienkiewicz, polish writer (Nobel Price in Literature 1905). English speaking readers may know him for “Quo Vadis.”

What is your favourite family tradition?
My two daughters (even now as grown women) love Easter Egg Hunts. I have to put chocolate eggs in plastic egg shells and in some, instead of chocolates, are clues eventually leading to a bigger gift.

If you could have one super power, what would it be & why?
I don’t want so sound banal or hackneyed, but it would be nice to be able to cure cancer in children and young adults. I can not watch young people dying prematurely.

Which four individuals, living or dead, would you like to eat dinner with the most?