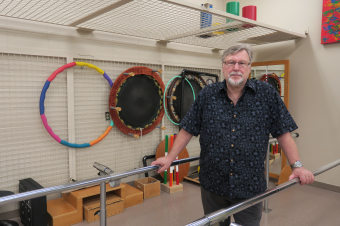 As a retired engineer and sales manager, math and science always came easy to Phil – until his stroke. Today, Phil is given homework tailored by his therapists to help him regain his comprehension of letters and numbers.

At 70, Phil looks and acts years younger. He stayed active most of his life, starting at four years old when he fell in love with playing soccer. He played until he reached 60 years of age and  coached for years, even winning the Ontario Cup one year. “It’s been my passion for so long, I still love it to this day.”

On February 10, Phil woke up early so he could watch soccer. “Or football, as they call it where I’m from,” he says in his English accent. Walking to the kitchen to make a cup of coffee, his mind and body just froze. He couldn’t remember where he was. He looked around, his body still stuck in place, wondering how he got there. After a few minutes, he remembered he wanted coffee. He started to make it, but forgot to put it in a cup and it spilled everywhere.

He then went to bed and fell asleep. “I should’ve known,” he says. “All the clues were there, but I was suddenly so tired.” He is not comforted by the fact that during a stroke, it’s common for sufferers to feel sleepy and doze off.

About half an hour later, he woke up. He wanted to watch soccer. His wife of 20 years, unaware what had happened, started talking about the day. Phil’s answers were gibberish. She couldn’t make out any words. The neighbour she called over to help knew right away—Phil was having a stroke.

He was sent to the St. Catharines hospital, where he stayed a week before being transferred to Hotel Dieu Shaver. The stroke had mostly affected his cognitive abilities so he had relearn just about everything. Therapists adapted his therapy to focus on speaking, writing, and reading comprehension. They even custom-make math and science homework based on Phil’s engineering background.

“At first, it was scary and overwhelming, knowing I had to learn everything all over again,” he says. “The staff had turned it around soon. No matter what I was feeling, they didn’t judge me.”

Soon, Phil saw that he was regaining some of what he thought he lost forever. He became more determined to make the best of it, practicing his therapy daily, even at home. “Every day I’m learning and relearning. I’ve been so fortunate to come here,” he says. “I love it here. The nurses and the therapists and even the staff delivering food to your room, everyone has been so great.”

National Day of Truth and Reconciliation

A day dedicated to truth and reconciliation.