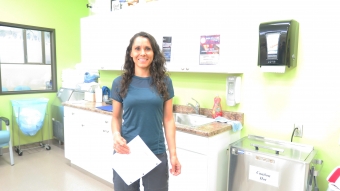 Stephanie Ray has been a Physiotherapist at Hotel Dieu Shaver for the past 15 years. Her love of physical activity is what drew her to the profession. Nowadays she is not only representing HDS, but our country as well.

Next September, Steph will be traveling to Lausanne, Switzerland to represent Canada in the 2019 World Sprint Triathlon Championships in her age category. The event includes a 750m swim, 20km bike and 5km run. With only finding a love for the sport three years ago, she credits her success to the support of her family, her coaches Jeff Scull & Kyle Jones of Edge Triathlon and the loving memory of her mother.

After her mother’s passing in 2015, Steph felt she needed something to help her cope with her mother’s loss. As already being a leisurely runner, she registered for the Red Bull Wings for Life.

With Red Bull Wings for Life, you participate at the nearest city and run at the exact same time as 100,000 other runners around the world, setting your own goal along the course. Once the chaser car passes you, you are eliminated from the race. As a first timer, Steph set her sights on reaching the 10km marker. Eventually the chaser car did catch up to her, but not until the 19km marker, the farthest distance she had ever run. The high she felt that day, accomplishing a feat she never had before, sparked a fire inside her, "wow … I feel like I can do so much more with myself."

From there she registered for her first Try-A-Tri in Niagara and found her way to the podium after only 4-5 weeks of training. She continued with a few Triathlon Sprints in the summers, training on her own. It was finally last summer when she really got serious about the sport.

While training by herself at the Welland Canal one morning, coincidently at the same time as Edge Triathlon, a connection was made. Since joining Edge, Steph has made significant improvements in the sport and her results are a true testament to that.

"I have made so many friendships and the people have been amazing. There have been so many positive life influences since joining Edge," Steph says. She is now part of a team of 65 adults, as well as 25 kids, working toward their own Triathlon goals. With having a young family of her own, an 11 year old son and 8 year old daughter, she has been able to involve them in the sport as well.

With the winter months approaching, Steph is headed into her long running season, a balance shift in the sport. She will be completing a half marathon this fall, to maintain her stamina, as well as continuing to bike at least once a week and swim three to four times a week until January. Once January hits, indoor training will commence with increased cycling and she will gradually begin to shift the balance to all three activities as her peak training season hits in May. From there, it is full steam ahead as she prepares for the World Championships in September.

Her motivation and determination has been unwavering, as it has really involved an entire lifestyle change. The most challenging part has been to balance work, family and training. Steph’s initial training involved bringing her son and daughter with her; "at times when I had to get a swim in I would bring my daughter along to kayak." Every morning Steph is up before 5:30am to complete her workouts. Once peak season hits from May until September, she will be working out up to seven days a week, while four of those days include workouts twice a day, along with working full time and spending time with her family.

Steph’s motivation has not only allowed her to reach her goals, but has been infectious among her colleagues. While many want to support her, as well as becoming inspired by her, you can even find Steph and other HDS team members enduring various circuit and body weight training sessions on their lunch hour together.

July 22nd, 2018 is a day that Steph will not soon forget. Her mother’s birthday and the day she qualified for the World Championships. With a second place finish in her category, a 6th place finish overall and reaching a personal best of 1:15:29 in the Toronto Triathlon, Stephanie Ray is headed to Switzerland to represent Canada.

Good luck at the World Championships, Steph! Your HDS family will be cheering you on from home!