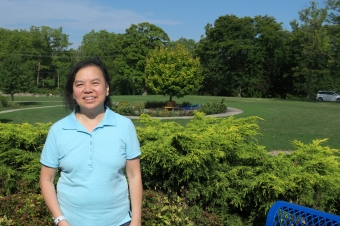 It has been a difficult couple of years for Bernadette, but she is determined to never give up.

Bernadette’s only daughter died during childbirth in 2015. A year later, her husband passed away. In 2017, while still dealing with the death of her husband, she was laid off from her job. She exhausted her benefits and her savings while looking for a new job. Bernadette’s husband did all of the driving, which meant she was nervous to drive too far from the city limits. This made finding a job more challenging. She finally saw an advertisement for an Accounts Payable Support position at Niagara Prosthetics and Orthotics, and she nailed the interview. Things were looking up.

Four months later, Bernadette went to work as usual, did her groceries and planned her meals for the next week. The following day while she was chopping onions as she’s done a million times, she felt her right arm losing strength. “Everything else felt fine. It was just my arm, so I ignored it,” Bernadette recalled.

Remembering that her friend was coming by the next morning to take her to church, Bernadette texted her saying she had to cancel. It ended up being a good decision. That day, she felt her right leg weaken and she fell. She called her friend, who was at church, when she realized she couldn’t get up. The pastor overheard the conversation and advised her to call an ambulance right away.

It took a few attempts to open the locked door, as she still couldn’t get up. As soon as Niagara EMS saw her, she was told she’d had a stroke. “I was always healthy. I don’t have high blood pressure, I don’t even take any medications,” Bernadette said. “This came out of nowhere.”

Bernadette stayed one week at an acute hospital before being transferred to Hotel Dieu Shaver Hospital. “When I arrived, I couldn’t walk or lift my right arm. I couldn’t even get out of bed on my own,” she remembers. “I was crying. I didn’t know what my future would be.”

Dr. McMillan, a physiatrist at Hotel Dieu Shaver, greeted her. “He told me, there are miracles happening here every day. His encouragement gave me a glimmer of hope and from that moment on, I chose to stay positive and to work hard.”

Bernadette spent six weeks at Hotel Dieu Shaver, with one goal in mind. “I wanted to go back to my normal life.” She worked tirelessly. “When the therapists told me to point my toes, I would do it. I would do it over and over again, 100 times. I was determined to get better, to always do more.”

Bernadette enjoyed using the parallel bars to practice her walking and balancing. At first she needed two people to hold her, but gradually she was able to do the movements on her own. She even watched the other patients with their therapists, memorizing their exercises so she could practice in her room.

“At Hotel Dieu Shaver, you’re surrounded by nurses, aides, and therapists. It’s so easy to get the help you need,” she says. “How can you not be motivated? You get to know the nurses and therapists so well. They’re patient and kind and they took the time to help me.” Bernadette remembers one nurse who took her outside in her wheelchair so she could enjoy the Healing Garden. She will never forget the compassion Dr. Arvinte, a physician at Hotel Dieu Shaver, showed her, or the wonderful talks with the Chaplains.

Bernadette knew the help would be short lived. “When I get home, there’s no one to help. I had to do it on my own.” Little moments were small victories – dressing on her own, opening the tiny packs of jam for her toast on her own.  “But the best was when I didn’t need to ring the bell to call the nurse anymore,” she says laughing.

Going home is a celebration. “My hard work has paid off.”

“I appreciate what Hotel Dieu Shaver has done for me. I didn’t know anything about the programs and services and the patients that are helped here. It’s the best place to get back on your feet.”

Bernadette would like to use her journey as a way to pay it forward. “I would like to come back and volunteer and to encourage patients that there is hope for them. Miracles do happen at Hotel Dieu Shaver,” she explains. “When something like this happens, you are left wondering what your future will be like. Come to Hotel Dieu Shaver, and you can see a future.”

“With God’s help and a positive attitude, there is hope. Don’t ever quit.”