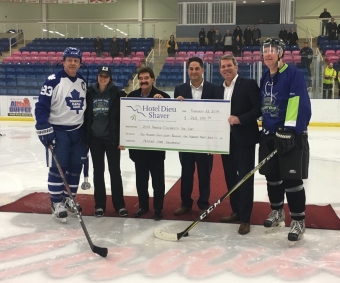 NHL Alumni laced-up their skates to face off with and against Niagara hockey amateurs for Hotel Dieu Shaver’s Foundation 5th annual Rankin Celebrity Ice Cup.  The two-day event brought in over $268,000 for the rehabilitation hospital’s Foundation - a record year for the organization.

“Rankin Construction is pleased to partner with Hotel Dieu Shaver to support the Celebrity Ice Cup hockey tournament through its presenting sponsorship of this exciting event,” says Mike Gallagher, team coach and staff member at Rankin Construction. "The event is always run without a hitch and never ceases to amaze our team with the level of detail to ensure all the players feel like we are playing in the NHL."

The Rankin Construction hockey team along with 17 other teams across Niagara and Hamilton joined NHL alumni Doug Gilmour, Darcy Tucker, Steve Thomas and many more, to kick off the tournament on Thursday, February 21st with a Draft Party at White Oaks Resort & Spa in Niagara-on-the-Lake where each team drafted an alumni to play on their team based on their fundraising totals. The tournament itself took place on Friday, February 22nd at the Gale Centre Arena in Niagara Falls.

Hotel Dieu Shaver's 5th milestone year marked a total of $1 million raised since its inception.  An announcement was marked by a celebratory After Party following the draft.

On behalf of the Hotel Dieu Shaver Foundation, the Board of Directors, and patients, we want to thank our generous sponsors, the countless volunteers, including our incredible staff, who helped make the event a success.  To the 18 teams who worked tirelessly to raise funds for Hotel Dieu Shaver - we thank you for your dedication and hard work in ensuring that our facility has the equipment needed to empower our patients to reach their optimal level of health and well-being.

From the bottom of our hearts - THANK YOU!

More information can be found at: www.celebrityicecup.ca