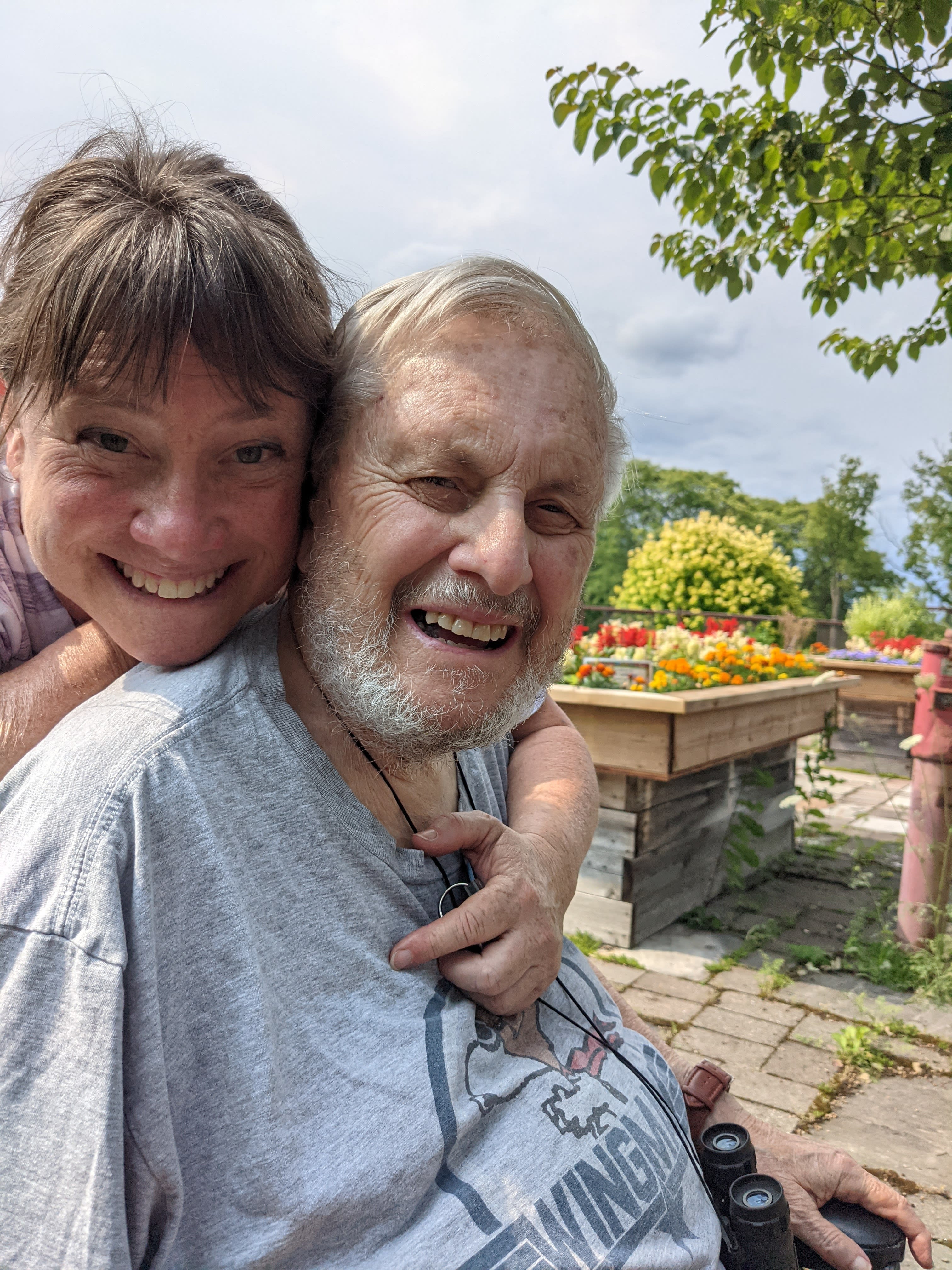 The Gibbs family always had a passion for hiking. They were inspired by fresh air, beautiful scenery and that sense of accomplishment.

On September 18, 1982, after tackling small portions at a time with his young family, Doug Gibbs completed the Bruce Trail, from Queenston to Tobermory. Unbeknownst to him, this would later become just a small piece of the puzzle. Fast-forward 39 years to the day, Doug would complete the Trans Canada Trail, setting foot in each province and territory of Canada, with his daughter Margaret by his side.

What began as weekend family trail walks over four decades earlier for Doug, June and their two young children, Margaret and Bill, transpired into lifelong memories, an unbreakable bond and a challenging feat that ran deeper than any of them could have ever expected.

Almost 20 years after the family completed the Bruce Trail, the Trans Canada Trail was officially established in the early 2000’s. Doug, a train enthusiast from St. Catharines, Ontario, had taken a real interest in the trail’s progress.

“As they were removing the rails from the former Canadian National Railway line across the country, they began building the Trans Canada Trail in its place,” he recalls. “I was really fascinated by that, so I followed its development very closely.” Douglas decided this would be his new challenge.

Margaret will never forget the day her father called her on the phone at her home north of Sudbury, Ontario to ask if she would take on this momentous task with him. She admits to initially turning down the idea, as she had a stressful full-time job, a young daughter, and significant living expenses to manage at the time. She could not imagine how it would be possible for her to get away. After thinking it over, she soon had a change of heart, realizing that she would much rather live a life full of memories, rather than one of regrets, especially when it came to spending time with her father. She called her father back that same day and said, “Let’s do it!”

The pair completed their first trek on Prince Edward Island, hiking tip to tip, in 2005. Margaret was 37 and Doug was 73 at the time. From then on, they set aside three weeks every other fall, to eventually annually, to complete a section of the trail in a different province or territory.

Finally, in June 2021, following a COVID-enforced hiatus of two years, Doug and Margaret booked their final trip. In September, they would be heading to Nunavut, their last stop on the Trans Canada Trail, to complete the goal they set many years before. Unfortunately, Doug would have an unexpected mountain to climb.

On July 18, three months to the day shy of their anticipated departure date, Douglas suffered a stroke. “I was at home eating dinner and I asked my wife if I seemed to be talking funny,” he recalls. “Next thing you know, I couldn’t move my right arm.” June ran across the street to consult with their neighbor who is a Registered Nurse, and she immediately drove them both to the hospital. After a week of being in acute care, Doug 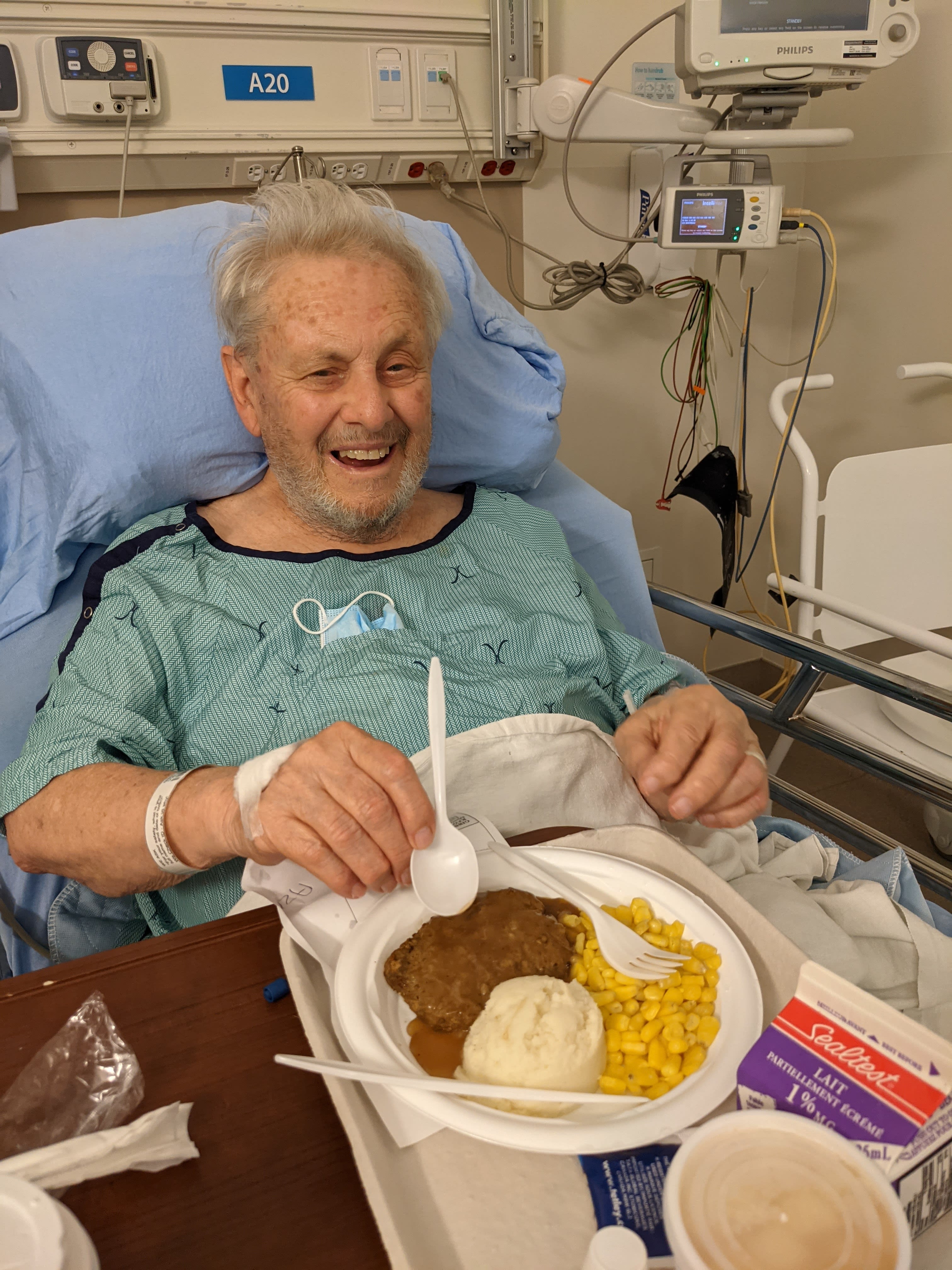 was relieved to find out he was being transferred to Hotel Dieu Shaver (HDS) to begin his rehabilitation journey.

Upon admission to HDS, he was experiencing profound fatigue, his speech was slurred, and he could not get out of bed or walk unassisted. His daughter Margaret recalls initially hoping her father would just be able to regain any sort of basic independent living skills, let alone travel to Nunavat for their upcoming trip.

“When I met Douglas for his initial assessment, the thought of him going on such a trip was totally unrealistic,” says his HDS physiotherapist Laura. “He could barely walk and was short of breath just sitting and talking.”

Doug’s quality of life had been significantly impacted by this stroke, and restoring his health, especially at age 89, was proving to be a real challenge. After a lengthy career in social work, as well as providing extensive volunteer services in the community, he now found himself on the other side, and he was having a harder time with that than he imagined.

“A great teacher once told me not to be so hard on yourself,” his HDS social worker Trish told him at one point when he was feeling particularly frustrated. As it turns out, the teacher Trish was referring to was Doug himself. He had trained and mentored her many years ago when he was her supervisor in the child welfare field, and after all the wisdom he had instilled in her then, she was now able to return the favor. Douglas began to apply his own advice.

Relentlessly, he informed his HDS therapists that he was indeed going to Nunavut as planned, and that was all it took. “Not only did my team make my goal their own personal goal, but so did everyone else at the hospital – from the kitchen staff, to the housekeepers, to the patient porters … everyone was cheering me on,” he remembers emotionally.

The goal was Nunavut.

“Doug was so dedicated to his therapy sessions,” tells his Occupational Therapist, Christine. “He would come each day with a new small goal he set out to accomplish and he would practice until he was able to do it independently.” Christine vividly recalls one time in particular, “He practiced trying to get his socks on and off, over and over, for the entire thirty minute session!”

With help from Laura and his physiotherapy assistant, Doug very slowly began walking in the hallways, eventually progressing to the track in the Courtyard therapy space with a walker. As weeks passed, he continued to work extremely hard in his daily sessions, constantly progressing, but not without barriers. 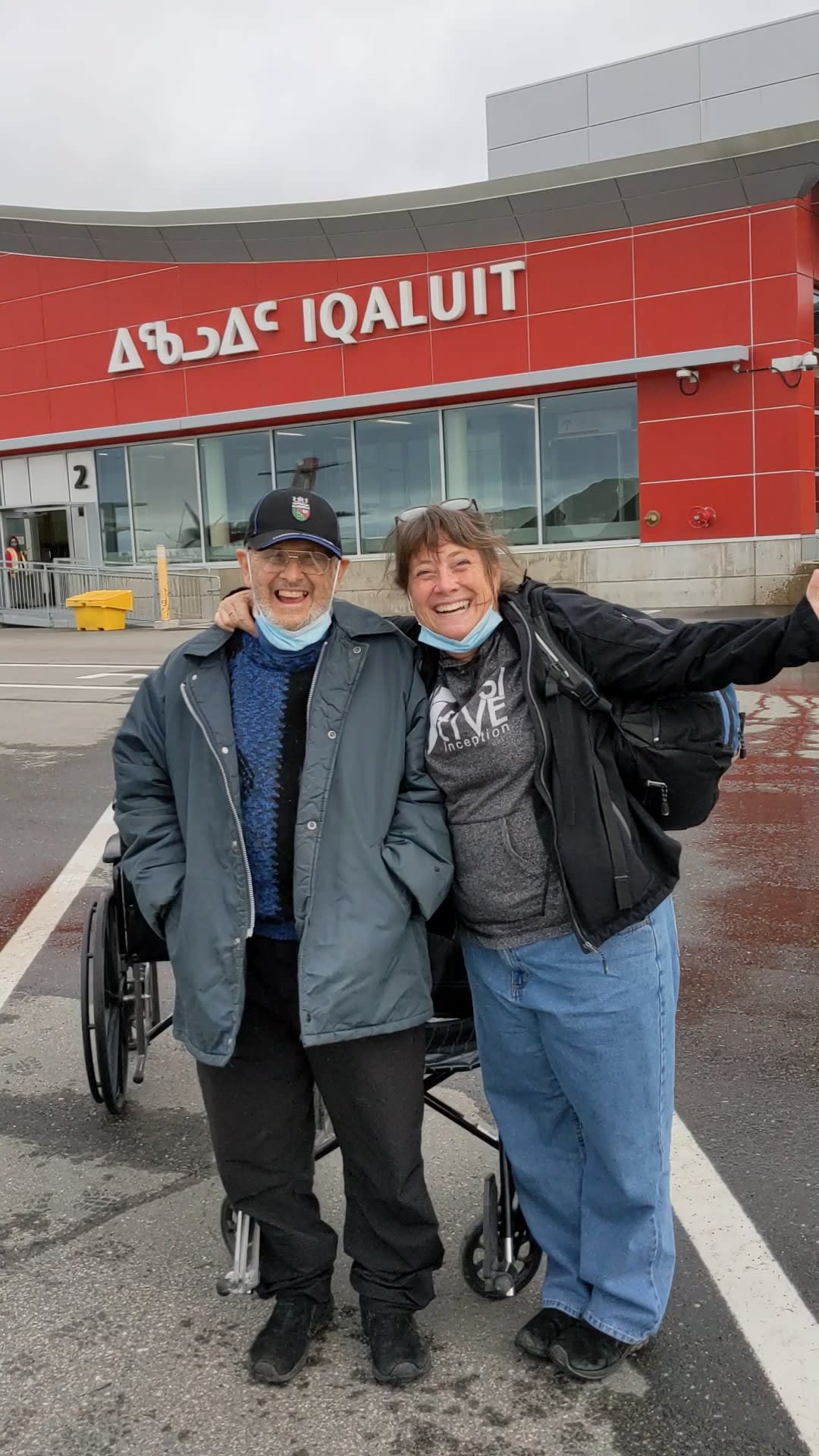 His stroke diagnosis forced him to battle depression, taught him how to deal with a catheter and tested his ability to speak clearly, feed himself, read, write and maneuver with a walker. A long road of obstacles, but ones that Doug continued to face and overcome.

As his discharge day approached, he and his team continued to work at achieving the ultimate goal - Nunavut. Dr. Reimer, Douglas’ physician at HDS, and one of his greatest cheerleaders, began researching to ensure that it was safe for him to take on this challenge once he left the hospital.

“It was never an if with Dr. Reimer, it was only a matter of when,” Margaret explains her experience with the physician and his approach of seeing the ‘whole person’ and not just his physical needs and abilities. “For him to tell my Dad that his goal was reachable and important was a pivotal point in his recovery, not just for him, but for his HDS team and for us as a family.”

Before Douglas went home, he was practicing going up 10 inch steps with his physiotherapist. This was especially strategic, as it prepared him to board some of the smaller aircrafts to reach his destination. A task that had seemed completely unattainable just six weeks prior, was now within his reach! With the all clear from Dr. Reimer and his therapy team, Margaret re-confirmed their trip to Iqaluit and the countdown was on.

On September 1, 2021 Doug was discharged from Hotel Dieu Shaver and able to walk up the front stairs to his own house for the first time in almost seven long weeks.

On September 18, 2021, as originally scheduled, Douglas and Margaret boarded a Canadian North plane and embarked on the final portion of the Trans Canada Trail in Nunavut. Sharing a hug, laughter and tears, they reached the final trailhead of their sixteen-year adventure. Sitting in his living room at home again, reminiscing with his daughter next to him, he distinctly remembers the moment he achieved his goal.

“I was just ecstatic when I stood there – I raised my arms in the air and looked over at Margaret ... “WE DID IT!” 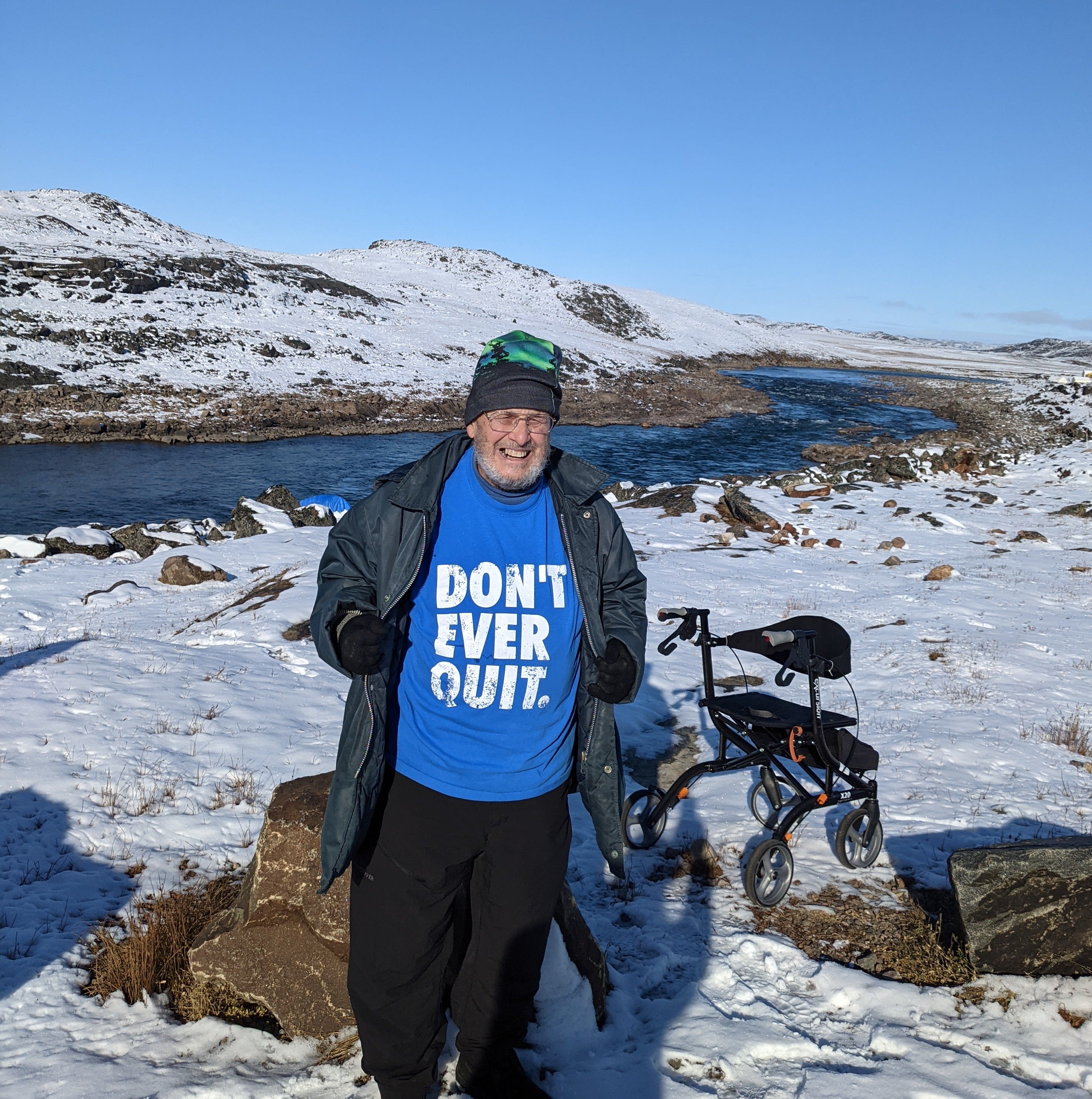