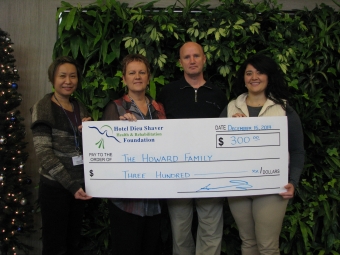 When Scott Howard’s right pinkie finger kept twitching, Scott knew it was an indication that something was wrong.

Doctors misdiagnosed the twitching as work-related stress, blaming Scott’s job as a paramedic for 19 years as the cause.

When the twitching progressed to his whole hand, Scott was sent to a motion specialist in London, Ontario. In 2006, two years after his initial visit to his doctor, Scott was diagnosed with Parkinson’s Disease. The diagnosis was not a complete surprise to Scott—his father had Parkinson’s.

Parkinson's Disease is a progressive disorder of the nervous system affecting movement. It develops gradually, sometimes starting with a small tremor in just one hand.  Being a progressive disease, symptoms worsen over time. Although Parkinson's disease can't be cured, medication and physical rehabilitation may slow down the progression of the disease.

Scott completed the Steve Ludzik Centre for Parkinson’s Rehab program at Hotel Dieu Shaver Health and Rehabilitation Centre in October 2014. On the waiting list for over a year, he credits the entire Parkinson’s team with getting him where he is today.

Opened in June 2013, the Steve Ludzik Centre for Parkinson’s Rehab at Hotel Dieu Shaver provides treatment in individual and group formats by an interprofessional team. The program aims to assist patients and their families in taking an active role to achieve their optimal level of function.

His wife, Patricia, whom he met at Niagara College while they were both in the Paramedic program, noticed an improvement soon after Scott started the sessions. “She says it gave me more confidence. I was really down on myself before. She noticed right away that I slept better.”

He says physiotherapy was “the best part.” The team’s positive outlook and encouragement, even when it was difficult, kept him going.

“I liked the fact that everything you need is under one roof,” says Scott. The social interaction of working together with the other patients in the group and the staff eased some of his anxiety and created an open dialogue for support and sharing information.

The dad of two daughters has now gained some of his independence back. “The fact is that my condition is going to get worse, but I have my quality of life back. My balance is better-I can pick up my kids, take my wife out for dinner,” he says. “It’s not the big things, but the little things like decorating a tree, or taking a cap off a water bottle, and carrying my daughter upstairs to bed. Those are the things that matter.”

Scott and his family recently had a garage sale with help from their local Church.  Pictured here is Scott donating some of the proceeds of the event to some of Hotel Dieu Shaver’s Parkinson’s Rehab Team.

To see Scott’s presentation on the Parkinson’s Program – click here.